Is Sharia Law or International Law — coming to your

local court? – If this Muslim has his way it may be!

In Oklahoma a state constitutional amendment was passed by 70% of the voters.  Its goal was to stop the use of other legal systems as the basis of court decisions.  Mentioned as examples were International Law and Muslim Sharia Law.  We in America DEFINE how we live and who we are as a people by the Laws Of Our Nation and the legal system of our courts.  Consider them the programming language that makes our country run!   If you change this, you re-make America in someone else’s image.  I have seen some of what Shari law looks like,  watching women  being stoned to 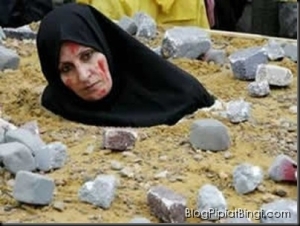 death (see the picture to the right).  Even if this is not “representative”  of Sharia,  I do not want it as I do not want to change America.  The Muslims came here, to America,  for safety, peace, freedom and justice that they did not have in their “old countries.”   Now some of them want to make our country into the one they ran from!   If they really want Sharia law,  they can choose to go back to the country they ran from, because of its laws, violence and lack of freedom.  If they want to live here then they need to embrace America and help strengthen it as  most of us are doing and not try to chip away at our foundations through court decisions!  Using the very freedoms they came here for to destroy this freedom makes no sense,  unless the real purpose for coming here is to undermine and destroy America!

The decision the Oklahoma Supreme Court needs to make regards the protection of American Values.  Consider this quote from our national constitution:

The Citizens of each State shall be entitled to all Privileges and Immunities of Citizens in the several States. A Person charged in any State with Treason, Felony, or other Crime, who shall flee from Justice, and be found in another State, shall on Demand of the  executive Authority of the State from which he fled, be delivered up, to be removed to the State having Jurisdiction of the Crime.

Changing the state laws in America, from those which define us,  to include Sharia has far reaching consequences, as explained above.

Furthermore in our Bill Of Rights (The First Amendment) we guarantee the freedom of religion but not the imposition of any other system of law arising from religion or political decision making:

Congress shall make no law respecting an establishment of religion, or prohibiting the free exercise thereof; or abridging the freedom of speech, or of the press, or the right of the people peaceably to assemble, and to petition the Government for a redress of grievances.

The freedom to worship as you choose is promised but the freedom to demand America accept your religious laws as a basis of justice is not.   It is bad enough that we are confronted with those wanting to make America bi-lingual or more.  If you come to America, be an American and learn to speak English out of respect for your countrymen and your chosen country!   Learn more from this article below:

Court: Oklahoma ban on Islamic law can be challenged | NewsOK.com.

3 comments on “Court: Oklahoma ban on Islamic law can be challenged | NewsOK.com”